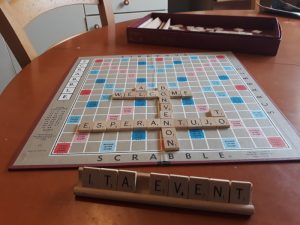 One late night I found an unintended use of Geni, an online family tree service. If you're logged in, and you're on someone's profile, Genie will attempt to find a path between you and that person, going through relatives. It's mostly intended to figure out the relation to people on your extended family tree. However, if  you manage to find a profile outside your family tree, like a celebrity's profile, Genie will still offer you to find a path, and sometimes it succeeds. The thing is, Geni's search won't let you search for just anyone. However, it lets Google index the profiles, so using Google's 'site' keyword, to limit search to a specific site, you can use Google to find the profile, and then let Geni find if there are any links between you and that person. After attending a lecture about Esperanto, hosted by the ITA (Israeli Translators Association), I tried the following search:

Turned out there was indeed a profile, and Geni managed to find a 30-link path between him and me, which does not make us related in any way, as the path goes through 7 families. This does not mean that there is not some shorter path, either through relatives, or non-relatives. This just happens to be a path Geni could find with the data available to it.

The lecture was given by Amri Wandel, a professor of physics in the Hebrew University in Jerusalem, and the chairman of Esperanto-Ligo en Israelo, the Israeli Esperanto Association. The lecture included a mix of history and advocacy, and an introduction to some features of the language. He also brought along some books in Esperanto, both translated and original (at least I think his own book about astrophysics was not a translation), and made the point that there is an Esperanto culture.

When Zamenhof created the language he had high hopes for it. In fact, he named it hope. He hoped it would become a universal language. Not necessarily to replace other languages, but in addition to them. That way, everyone could speak to everyone else directly, and in turn this would foster peace and understanding. He was not the only person who believed that communications promote peace. There were similar sentiments about the telegraph at first, and more recently about the Internet. A little over a century ago, socialists believed a shared ideology would prevent wars, because workers would not fight other workers. Then there was a world war which proved them wrong. While a shared language and shared ideology sometimes promote more understanding on a small scale, thus far, they have not been enough to create global harmony and understanding.

Wandel demonstrated the simplicity of the language and argued that this makes it a good choice for an international language. He kept making comparisons to English. He also pointed out that Esperanto is the most successful conlang. In one and a half centuries, its community has grown to over two million speakers, according to the most conservative estimates. Given its goals, could this really count as success? It was  intended to be a global language, and now the community is proud to announce that it's king of the conlang hill  – which isn't that big a hill.

Simplicity alone is not sufficient to explain its relative success among conlangs. A language needs a community. Arika Okrent, in her book "In the Land of Invented Languages" draws a comparison between Esperanto and modern Hebrew. She does not claim the latter to be a conlang. She observes that both languages were adopted by ideological communities and are strongly associated with their respective ideologies. If Zamenhoff were to merely explain the technical advantages of his invention, like many other language inventors did, it would most likely not survive to this day, or at most be preserved by a handful of enthusiasts.

In fact, the current dominance of English demonstrates that simplicity is not the most important factor in making a language dominant. Wandel pointed out that English has achieved its present day status only because of the decades long dominance of the British Empire, followed by the dominance of the American empire [my word, not his]. Well, yes. That's  how a language acquires regional or global status. It needs either political, military, or economic power to give a lot of people reason to want to speak it. There is no council of elders deciding which language is to be the next global language. English, as Wandel observed, is not easy to learn. I once referred to English as the bastard offspring of Latin and German. Technically it's a natural language, however it looks more like something born of an unnatural act between several other languages. It has quite a few rules, and no fewer exceptions – and with all that baggage, English, or at least a significant subset of English, has become a nearly global language.

Furthermore, there are other languages, even European languages, with fewer irregularities and inconsistencies. Why not see how their features compare to Esperanto? Is it due to the current status of English, or because that's the other language he knows (besides Hebrew, of course)?

Predictably, conlangs from works of fiction were mentioned, and Wandel put down Klingon as "not a language, just a bunch of vocabulary invented for a TV series." While Klingon was indeed invented for the Star Trek movies and TV series, and was developed in response to the demands of whatever stories the shows and movies told, it continued to be developed beyond that. A general description of its grammar would not sound too different from the general description given by Wandel of Esperanto. Like Esperanto, it was designed to be simple to learn, with some basic words, and suffixes and prefixes used to conjugate them. Unlike Esperanto, no one ever claimed that Klingon was designed to promote peace. Esperanto has approx one thousand native speakers. Klingon has only one, and reportedly, he refuses to speak it.

This is not an attempt to start a Klingon vs Esperanto debate. I'm certainly not advocating Klingon. Just saying that it's best to speak about the subject you know, and avoid making trivially refutable comments about the things you don't.

Advocates of Esperanto can be found in all walks of life. One such advocate was science fiction author Harri Harrison. He mentioned Esperanto in some of his books. For instance, in the Stainless Steel Rat series, Esperanto is a global language. Also for humans who colonized other planets. Each colony has its own language, but Esperanto is used for communicating with others.

Wandel had a lively audience, perhaps too lively at times. I believe he managed to get his message across. In a nut shell. It's easy to learn. It's not associated with any ethnic group or country, so one does not submit to any other culture. It's a community. He also gave links to online beginner courses. One of them is on github, a platform for open source projects. A concept that shares some of the ideas of free and open communications between people. It's an apt choice for a platform. I have no idea whether this was intentional – but I like the association.