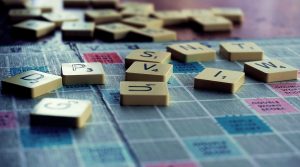 One of the family pastimes, ever since I was very young, was playing Scrabble. At first I played the Hebrew version, "Shabetz-Na". The Israeli sets sold back then were made of light blue plastic tiles, and the letter shapes were not drawn, but embossed. This did not detract from the fun of playing. Later on, when my father's job took us to the United States for two years, we got higher quality sets in both Hebrew and English, and we often played within the family, as well as with Israeli and American friends.

After returning to Israel we continued playing Scrabble, sometimes in Hebrew and sometimes in English. Hebrew is a very different language than English. Hebrew is based on conjugations and forms to a larger degree. That feature of the language makes it easy to create new words according to conjugation rules, which may have not been seen before, and yet are perfectly understandable.

One evening, we couldn't decide which language we wanted to play – so we decided to play Hebrew and English Scrabble simultaneously. These languages use different alphabets, so naturally, they could not be used on the same board. We placed a board for each language. We also decided that having each player play one language, and then the other on each turn would make the game too slow, and the other players' wait, much longer. So we decided that while player A plays on the Hebrew board, player B plays the English one. Then when player B plays the Hebrew board, player C plays the English one. We kept score for each language separately, and a the end determined the winner for each language and the overall winner.

Scrabble was invented in 1938 by an American architect called Alfred Mosher Butts. It was based on an existing game called Lexico. He named the game "Criss-Crosswords". The game was a commercial failure, and eventually he sold the manufacturing rights in exchange for royalties to James Brunot in 1948. Brunot simplified the rules and renamed it to Scrabble. He fared a little better, but didn't manage to make a profit on it.

In 1952, the president of Macy's learned the game on a vacation. Returning from the vacation he placed a large order of Scrabble sets for Macy's. This finally made the game a commercial success, and also beyond Brunot's manufacturing capabilities. He sold the manufacturing rights to a larger company. After some acquisitions and mergers, Scrabble ended up being owned and marketed by Hasbro in the US and Canada, and by Mattel in the rest of the world. The rules have also evolved over time. More detail about the rule changes can be found on the Wikipedia entry for Scrabble.

Another Scrabble enthusiast in my family was my grandfather. When I visited him on my holidays in Europe, I'd usually spend the day playing tourist, and in the evening we would sometimes play a game of Scrabble after supper. I believe he had played in the past in Scrabble competitions in French. My common language with him was English. He was the only person I ever saw playing Scrabble with a hunting instinct. One could see his eyes rapidly scanning the entire board, zeroing in on one spot or another, and then he would place the tiles and construct a high scoring word. I think he was nearly 90 the last time I experienced this, and he wiped the board with all of us.

Scrabble is now available in 29 languages. I've seen photos of a Klingon version. However, those photos show Klingon tiles on an English board, so I guess that's not an official Scrabble version.

The game is relatively easy to implement as a computer game, at least with no AI. Thus various clones, or near clones, can be found on PBeM (Play By eMail) servers. However the first one that drew the attention of the trademark owner and their lawyers was Scrabulous, a Facebook game based on Scrabble. It was later renamed to Lexulous, and sufficiently modified to avoid infringing on Scrabble's copyright.

The most successful Scrabble variant online is Zinga's Words With Friends.  The colored tiles on the board are arranged differently than in the original game. In fact, there are some interesting sweet spots, places where a word can be placed on both a triple-letter square and a triple-word score square in the same turn. It has some perks one can can get with game coins that are awarded for achievements. It has weekly challenges for achieving a certain number of points over all of one's games. It gamifies the experience beyond the context of the single game. The games are strictly two player games. Multiple player turn-based online games are more tricky to manage than two player games.

Scrabble and its variants appeal to people who like words. I just learned the other day that April 13 is International Scrabble Day. This is a post I intended to write for some time now. Now that I know it's Scrabble day, it seemed like a good day to post it.